Ben Rice on Degraw Fest 2018 and new single 'The Getaway'

It's not uncommon for me to plan a weekend getaway or roadtrip around music. Past travels have taken me to destinations ranging from Nashville, Tennessee to Stockholm, Sweden. This past weekend, I found myself in Brooklyn, NY at independent performance venue Littlefield for the better part of a day to take in the second annual Degraw Fest - one of the most memorable independent music showcases I've ever experienced. The event featured ten ridiculously-talented, Brooklyn-based bands - all of whom have recorded their music at Degraw Sound studio just around the corner from Littlefield, and who share a common thread working with musician and producer Ben Rice. Over the past few years, SoundThread Music Blog has published posts about several artists who have recorded with Ben at Degraw Sound, including Eighty Ninety, Queue, and Goldkey.

In anticipation of this year's Degraw Fest, Ben curated a 'Degraw Fest 2018' Spotify playlist presenting music from each of the participating bands (the first 10 tracks), as well as several other great Degraw Sound-recorded songs - an excellent way to hear samples of the outstanding music coming out of the studio.

A native Brooklynite, Ben Rice has become a fixture in the local New York City music scene. He is an established singer and guitarist, having fronted indie rock bands Surefire (Lizard King/WMG) and Blackbells. Most recently, at his Gowanus recording studio, Degraw Sound, he has produced acclaimed records for The Candles, The Skins, Elliot & the Ghost, Queue and Eighty Ninety.

Fascinated by recording and songwriting from a young age, Ben began making 4-track home recordings when he was twelve and landed his first job at a recording studio at the age of sixteen. Balancing his love of recording and performing, he spent years touring, sharing stages with Arctic Monkeys, Band of Skulls, Brendan Benson and Cold War Kids. All the while, he honed his studio skills under the mentorship of producers Eddie Kramer (Jimi Hendrix, Led Zeppelin), Gus Van Go and Werner F. (The Stills, Priestess).

Ben Rice has just released his debut solo single, "The Getaway" - an impressive, catchy Americana-tinged, highway-driving anthem. With solid vocals that conjure up influences and elements of a modern, indie Tom Petty, "The Getaway" cues a remarkable, strong solo return to the limelight for Ben Rice. For the single, Ben called upon his friends Greg Wieczorek (drummer: Norah Jones, The Autumn Defense, Joseph Arthur) and Pete Remm (keyboardist: Norah Jones, Valerie June, Jonathan Wilson) to join him in the studio for the recording sessions.

I had the pleasure of meeting up with Ben at this year's Degraw Fest. We talked about the event, the bands that were participating in the festival, and his new single. I'm thrilled to share his responses and insights in this post.

[STMB]: As the second annual Degraw Fest commences, did you ever imagine, at the time you founded the recording studio (2012), that such a showcase of these incredible artists and musicians would become a recurring event and attract the attention that it has?

[BR]: I never imagined that we’d wind up putting on our own music festival. We’ve always had parties here at the studio for the holidays or anniversaries or just for the sake of partying. But when our fifth anniversary came around last year we decided we wanted to do something bigger than what the studio could fit and that we wanted to open it up to the Brooklyn community and share the music that all the artists we record have been making. Everyone had so much fun last year and the effect that it had on all the artists was so cool to watch that we decided we had to keep doing it.

[STMB]: As an outsider and observer, it's my impression that this collection of bands functions a lot like a sort of extended family - with some common threads in production, musical input and mutual support of each other. Is that what you see from your perspective?

[BR]: Yes, I think you really nailed it with your description and it makes me super pumped to hear that this is coming across. It’s something that I’ve tried to foster here from day one - to create an awareness among artists of what’s happening around them and have a space where ideas can be shared and supported.

We have two studios here at Degraw Sound -- my room which is the main tracking room and Harper James’ production room, so it’s not uncommon for us to pop our heads into each other’s spaces to hear what’s being worked on  and share ideas. The same can be said about the artists who we record - sometimes they’ll step out to the lounge to grab a coffee while I’m finishing an edit or production idea and I’ll look up twenty minutes later like ‘where’d they go?’ Turns out they’re hanging in the lounge with whoever was recording in the other studio that day, deep in conversation about music.

[STMB]: Many of the talented bands that are performing at this year's Degraw Fest are as yet unsigned, but garnering quite a bit of attention (including international) from a variety of outlets (blogs, playlists, festivals, other established musicians, etc.). While the studio and elements of the production are the obvious common threads, have you considered anything from a label/release perspective (e.g., creating a 'Degraw Sounds' label) to promote or distribute the music?

[BR]: I’ve definitely thought about it, but having a record label and having it make sense from a numbers perspective is tough, especially when you want to be fair and equitable to artists. It’s fun to play with the idea, but when you start thinking about how much it would cost to be able to get artists a livable amount of money, be able to cover the recording costs and then adequately promote a release and tour, it adds up quickly. If there’s some hedge fund or investor out there that wanted to give us a few million dollars, we could create a pretty Utopian record label to support the artists that we love and make some incredibly dope music. So, while I’d never say never, right now I think the way that we can be most helpful to the artists who we’re working with is in a more unofficial capacity. We’re always on the lookout for opportunities for them, but they maintain the freedom to be able to grow at their own pace and on their own terms.

[STMB]: Have the past few years of producing/recording the bands that have taken up temporary residence in the studio influenced your return (or timing of your return) to the stage with the release of your new single ("The Getaway") and your forthcoming EP release?

[BR]: When you’re surrounded by such a talented group of friends, it’s hard not to have that creative energy rub off on you, but I think what really influenced me to get back to making my own music was just seeing how quickly life goes by and getting to a place where I was like: making music is what I enjoy doing, so I’m going to do it.

I think with owning a studio at a relatively young age, I wound up getting caught up in this self-imposed mental trap of "I have to act like a professional now, I can’t rock out anymore, I have to spend my time productively pretending to do business-y things or whatever" and the reality is, so much of that just doesn’t matter and it’s not how I want to spend my life. One of our specialties as humans is coming up with excuses for why we can't do things and justifying it to ourselves. All the time that I was sitting there going "I don’t have time to make music" I had time to do all sorts of other garbage. I'm all about simplifying, cutting out distractions and focusing on doing things I believe in, connecting with people face to face. For me, from a young age, making music is how I’ve done that, so I had to get back to it.

[STMB]: Congratulations on your impressive debut solo single! Can you tell us a bit about the theme or origin of "The Getaway"?

[BR]: I’ve always felt that saying too much about what a song is about can detract from it. I know what it means to me and my hope is that it’ll resonate with some people, that they’ll get where I’m coming from and that they’ll be able to find some personal meaning in it. What I can say is that it was an important song for me to write in the process of reconnecting with this part of myself.

I called upon two of my musician friends Greg Wieczorek and Pete Remm to lend a hand in the making of the track, because I knew that together we could create the song I wanted it to be. Everyone involved in the process added and took away their own meanings to and from the song, and that’s what I hope for listeners to do as well.

"The Getaway" is the first single from Rice’s forthcoming EP, which is set to be released September 21, 2018. At this year's Degraw Fest, Ben took to the stage to perform a set of as yet unreleased songs from the new EP. Based on what I heard him perform this weekend, it is sure to be a fantastic, anticipated set of new recordings from Ben Rice. 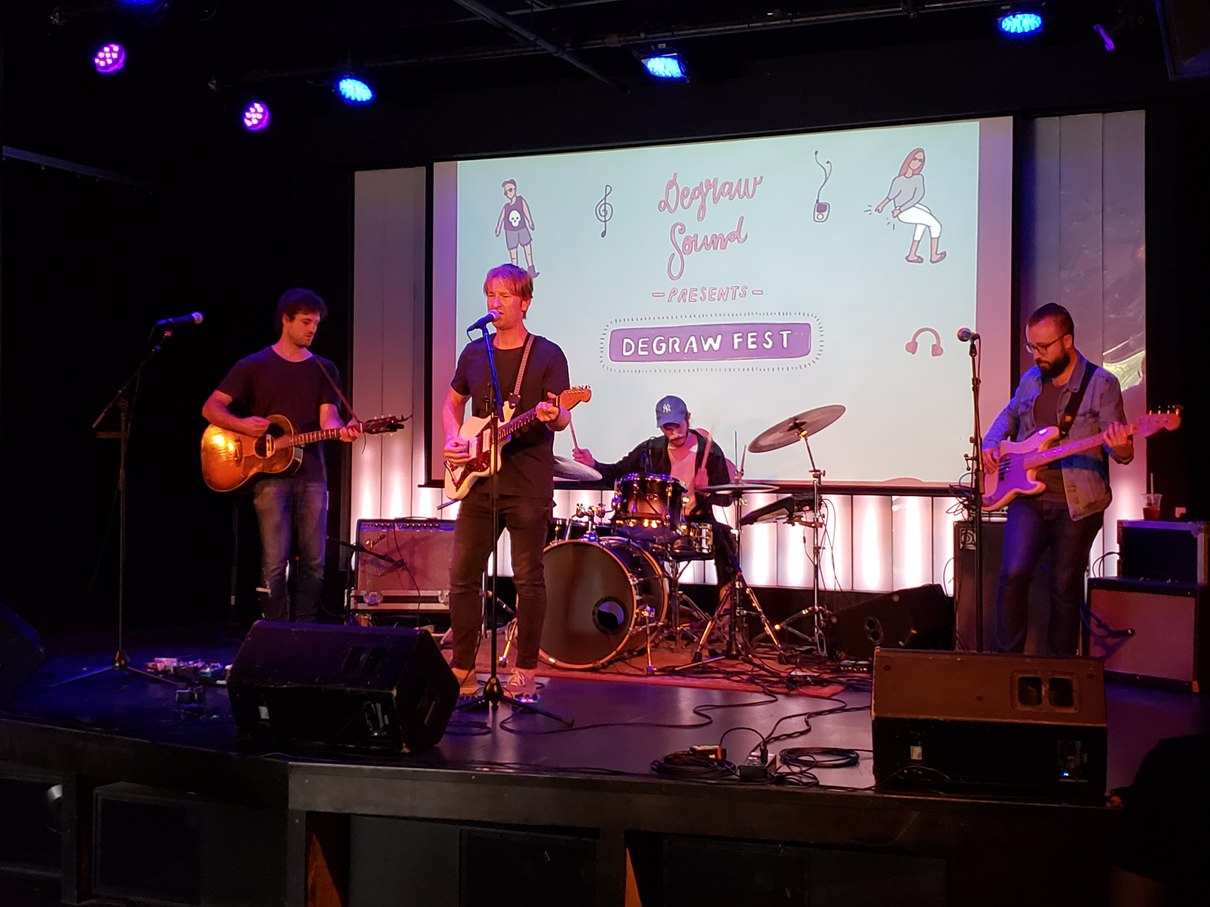 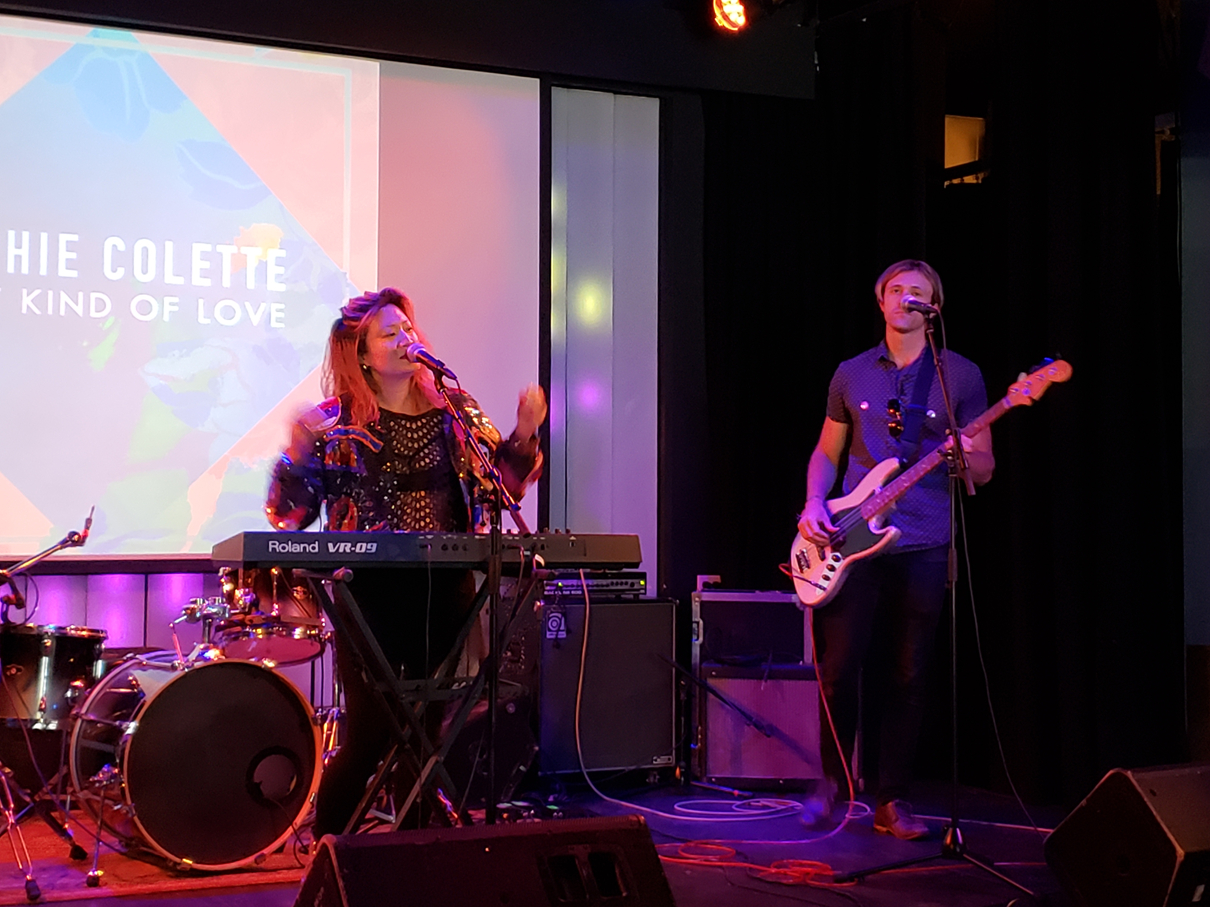 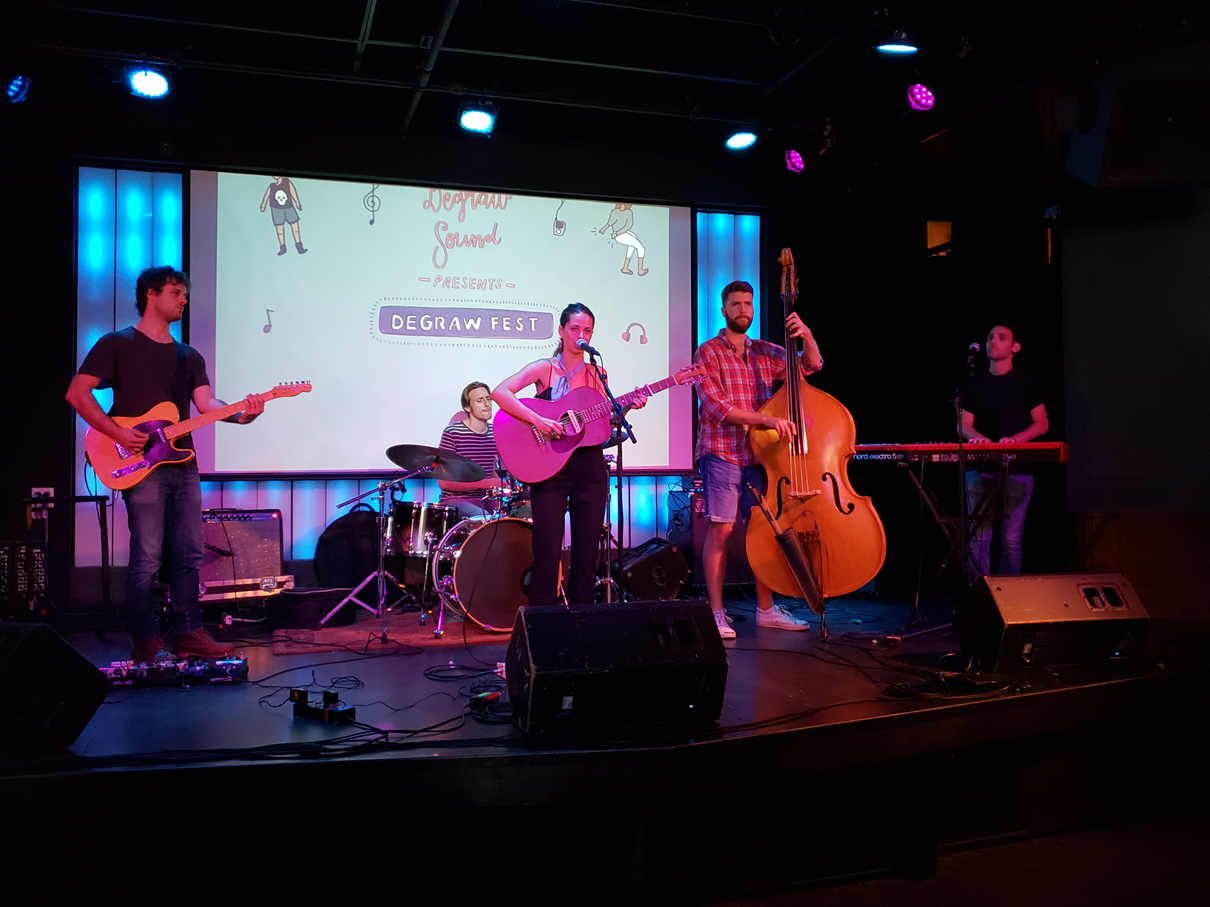 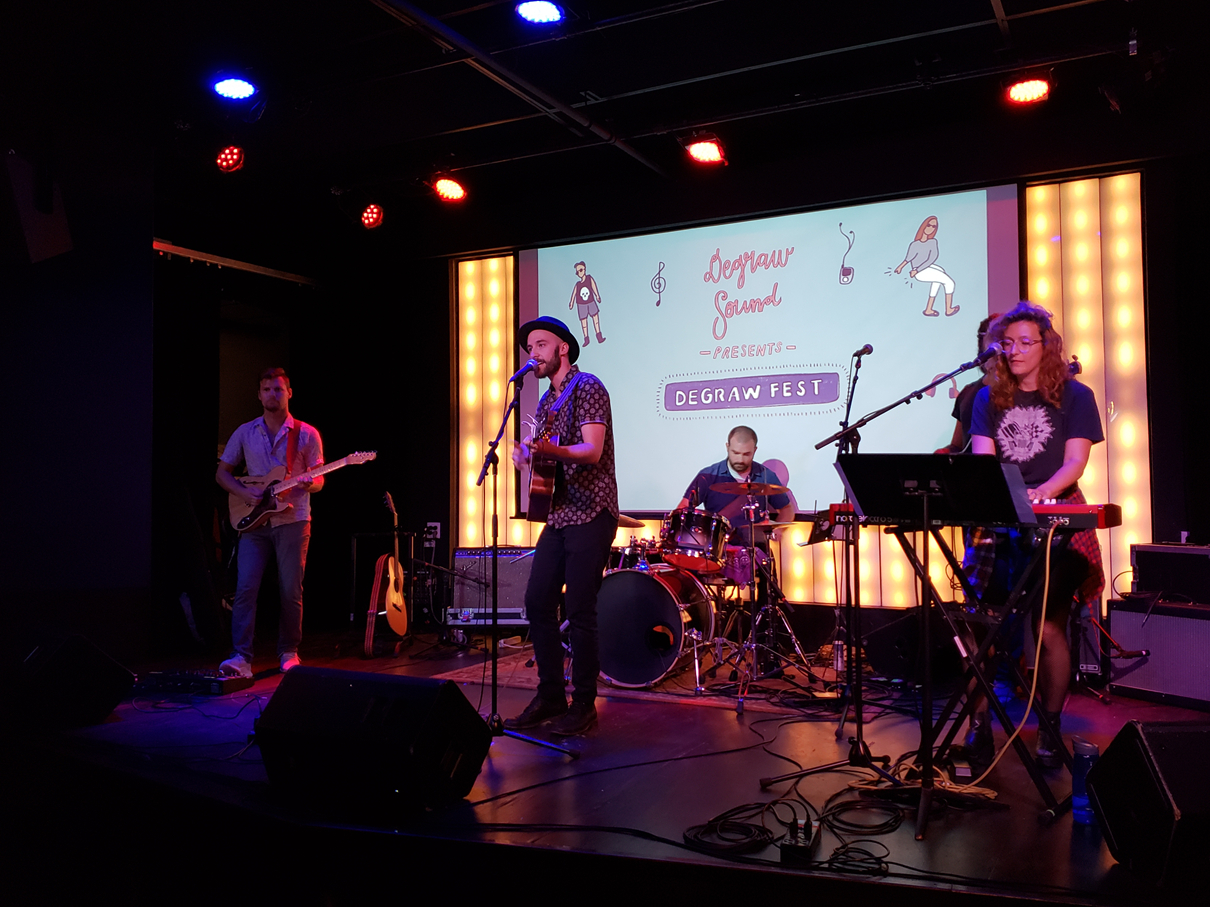 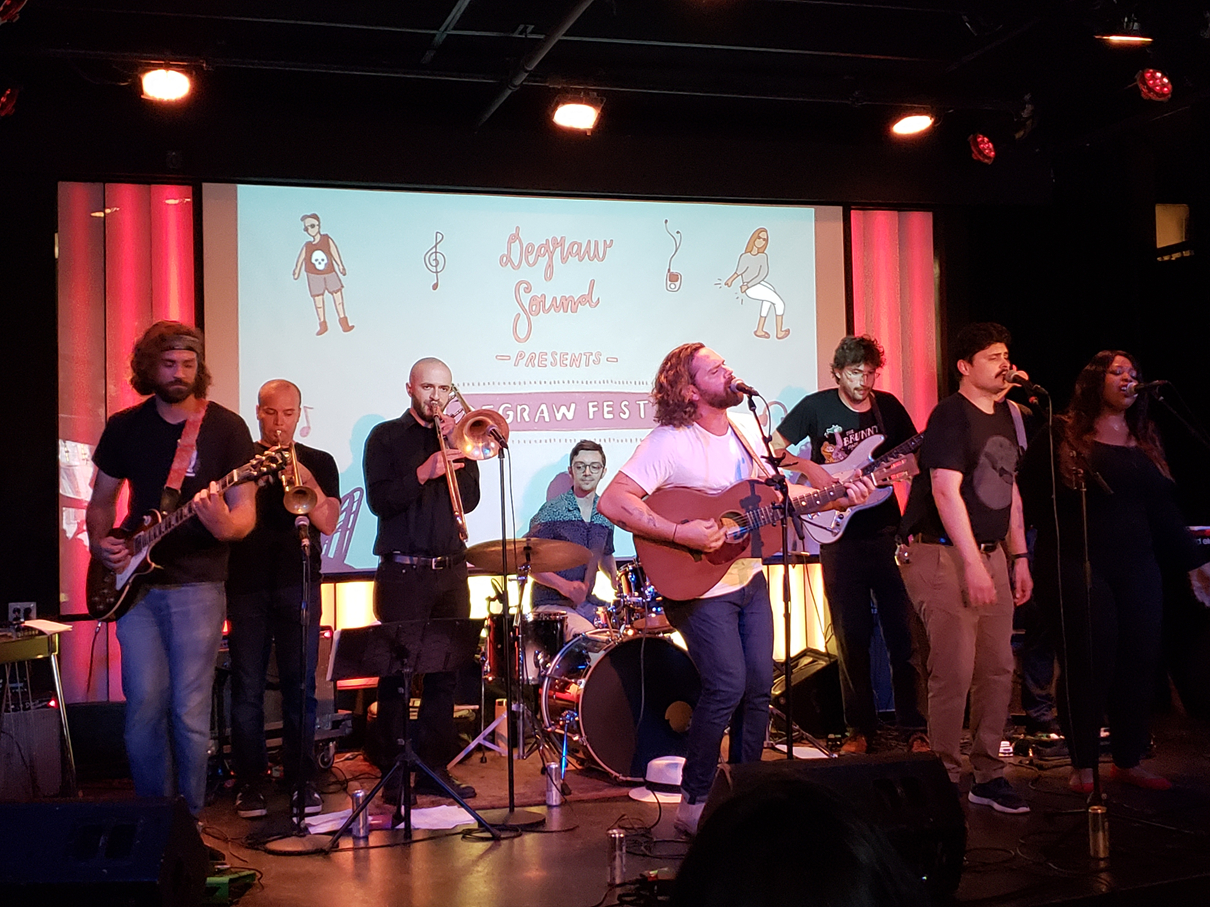 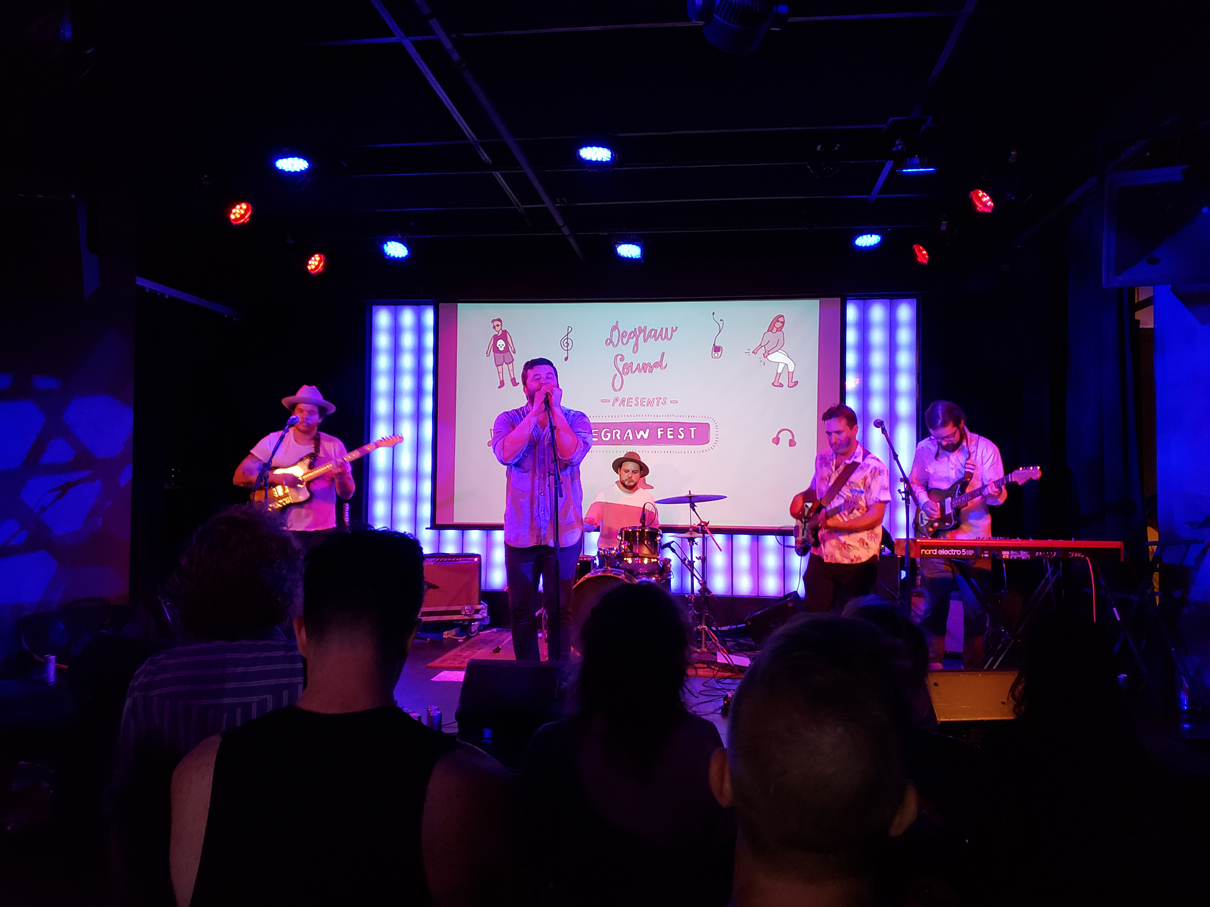 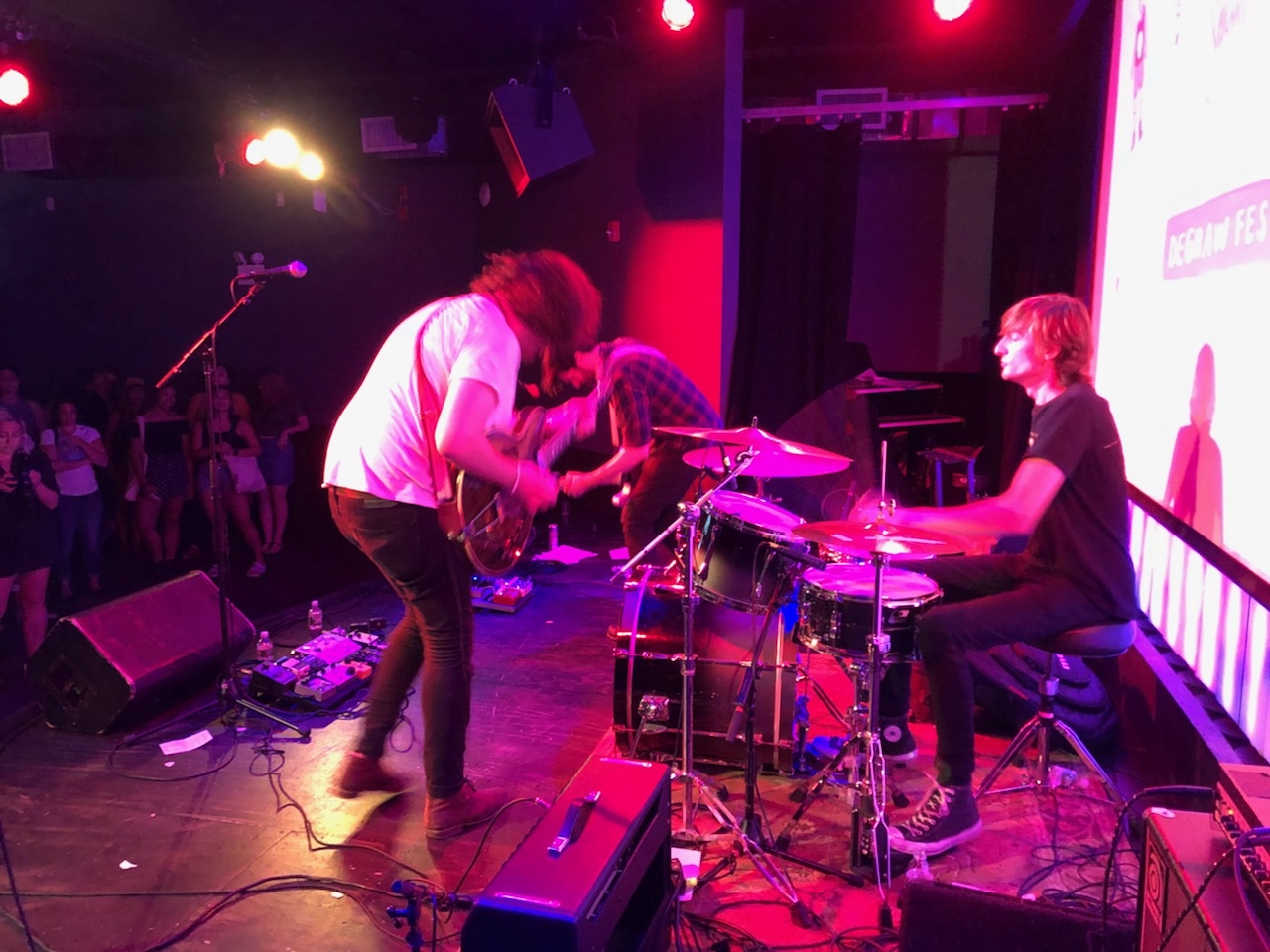 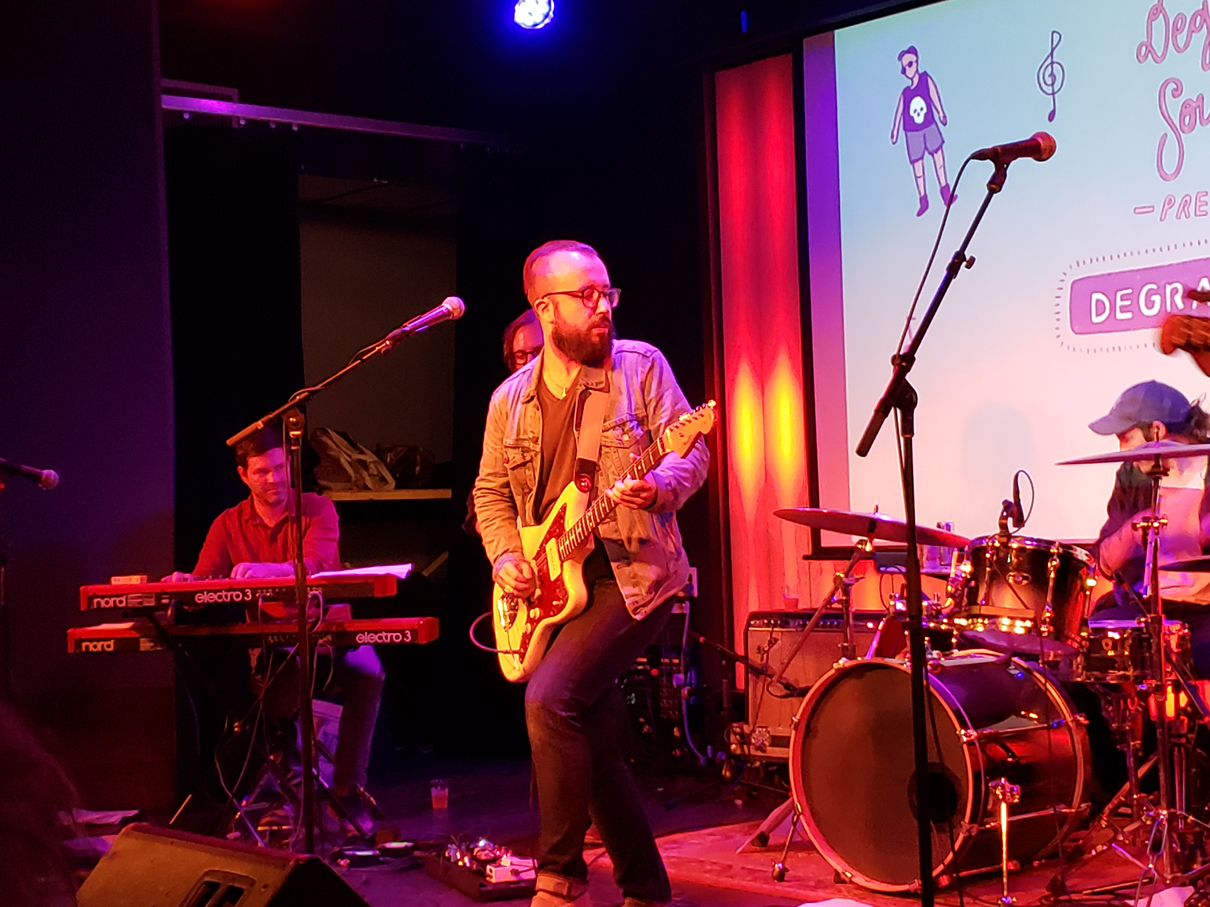 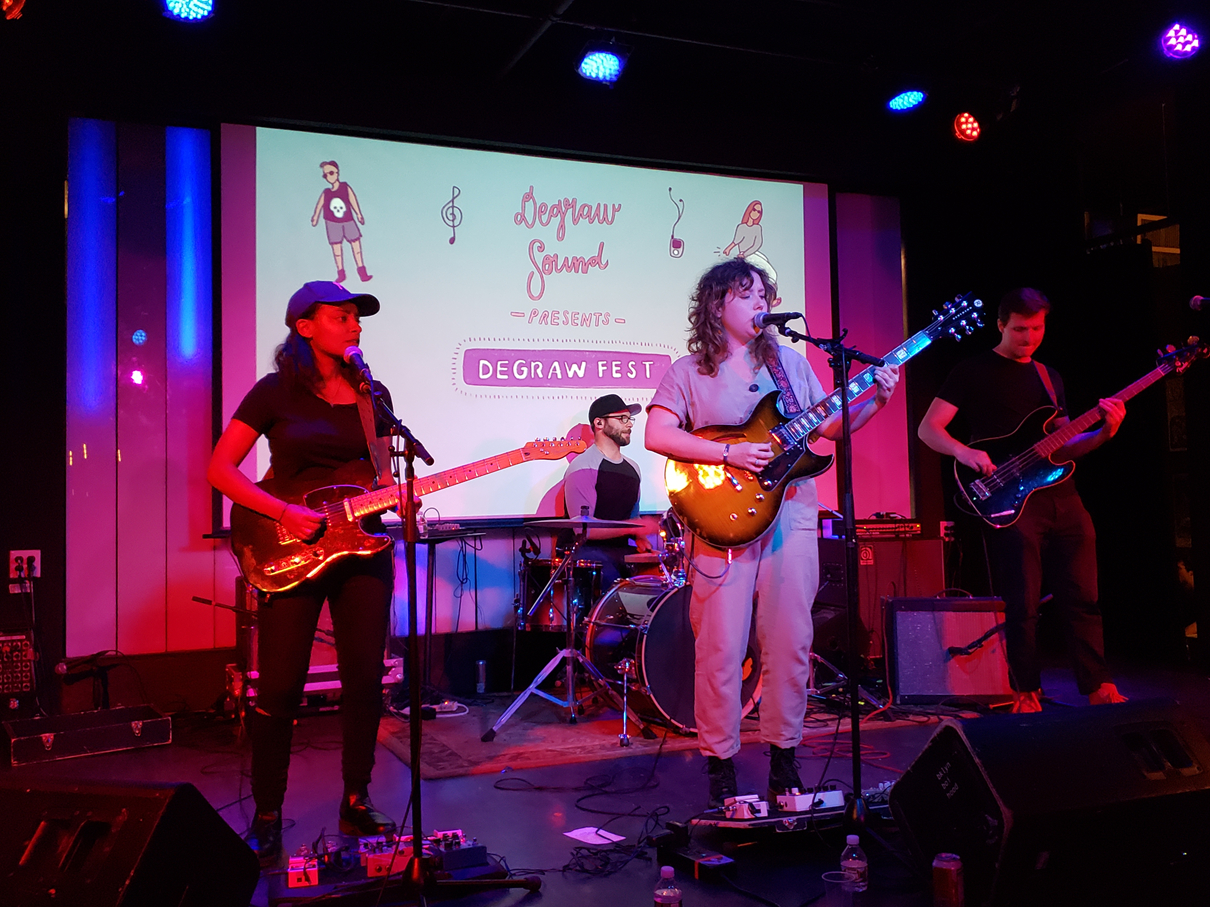 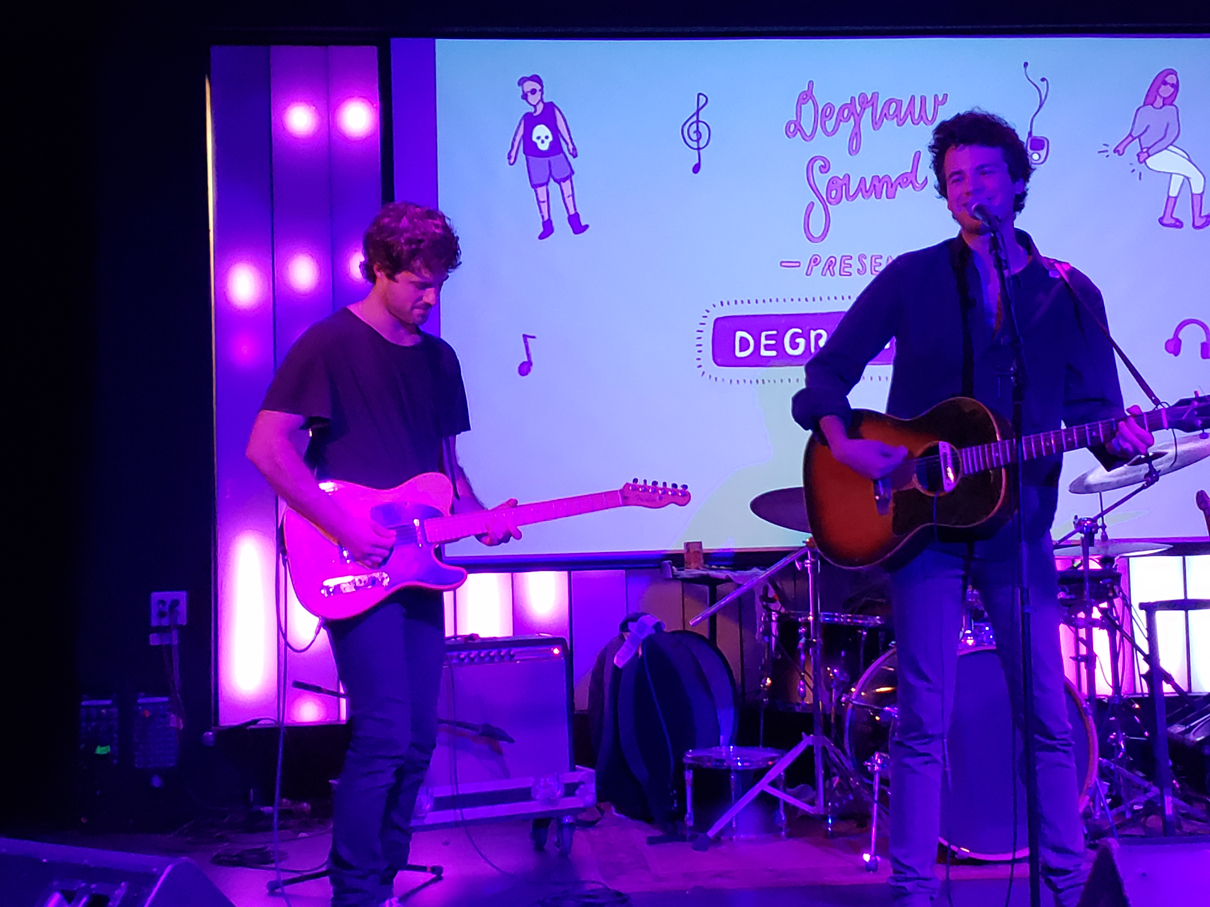 For additional photos and a few short video clips from this year's Degraw Fest, visit SoundThread Music Blog's Instagram page. And be sure to follow Degraw Sound and its talented roster of artists on social media for news and announcements of upcoming performances ... and hopefully next year's 3rd annual Degraw Fest!