UK synth duo Magnetic Skies recently released their stunning debut EP, Dreams and Memories, featuring their modern blend of cutting-edge pop, electronic soundscapes and soaring melodies, with a nostalgic nod to the cinematic sounds of 80's alternative music. The duo has garnered significant attention since the EP release, having been described as echoes of Tears for Fears and Japan meeting the modern world of Chvrches and Empire of the Sun. Magnetic Skies was formed in early
93 views0 comments
Tom H

And The Echo | Made For You (new single)

I've come to the conclusion that it's impossible for indie-synth duo And The Echo to make a bad song - everything they create is pure gold to my ears. This is clearly the case for their uplifting, brilliant new single, "Made For You", their first new music since February 2017. Hailing from Oxford, Mississippi, this rising-star duo has consistently been producing bright, 80's-influenced, synth-pop sounds going back to their 2014 self-titled debut album, which included the outs
47 views0 comments
Tom H

It's been six years since Swedish dream-pop duo The Sound of Arrows released their debut album Voyage (2011), loaded with upbeat, synth-driven, pop gems like "Magic" and "Into the Clouds." In late 2016, the band, comprised of Stefan Storm and Oskar Gullstrand, announced that new music was on the way. Following a series of single releases, including "Beautiful Life," "In the Shade of Your Love," and the recent "Don't Worry," the band returns with their gorgeous, second full-le
160 views0 comments 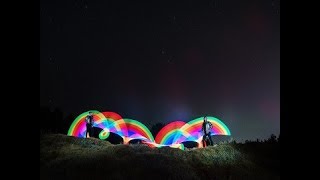 Hot on the heels of their recent album release, And The Echo II, Oxford, Mississippi-based synth-pop duo And The Echo unveil the official music video for the album's first single, "The Blind Ones". Directed by the music video team of Michael Brouphy and Jovan Jackson of SPVRK Media, and financed through a recent Kickstarter campaign, this well-produced music video nicely captures the song's energy and uplifting atmosphere, and provides a colorful, professionally-filmed visual
39 views0 comments
Tom H

Synth-pop duo And The Echo returns with And The Echo II ("Album II"), the brilliant follow-up to their outstanding 2016 self-titled debut album. Based in Oxford, Mississippi, the band is comprised of Winn McElroy and Morgan Pennington, who have been making music together for the past three years. And The Echo II is testament to how well this duo continues to create impressive, melodic tunes with strong, shining vocals, and such tight and polished synth production throughout.
198 views0 comments
Tom H

Yazoo | You and Me Both

Even though it was released in the middle of summer (1983), Yazoo's "You and Me Both" (Mute Records, STUMM 12) makes me think of winter. This was their second and final album - the end of the line for Vince Clarke and Alison Moyet. The collaboration between Vince and Alison had fallen apart, with much of the recording done with each member having separate solo time in London's legendary Blackwing Studios. One might say the album was recorded after the breakup. Even the album
478 views1 comment
Tom H

And The Echo cover Wham!'s "Last Christmas" for this Christmas

December is here and so is the brilliant new Christmas cover song from Oxford, MS-based synth-pop duo And The Echo. True to the spirit, tempo and style of the original Wham! hit from 32 years ago (has it really been that long?!?), And The Echo's re-energized version of the classic Wham! song "Last Christmas" is one you'll definitely want to add to your holiday playlist. And while we have your attention, although it has nothing to do with the holiday time of year, do yourself
56 views0 comments
Tom H

New Artist Spotlight | And The Echo

And The Echo is the brilliant electronic pop collaboration of Winn McElroy and Morgan Pennington, who started making music together in early 2014 in Oxford, Mississippi. They have recently released their self-titled, full-length debut album. "Okinawa" is the album's explosive opening track, and I don't think there could be a better choice for drawing the listener into the synth-laden, lush music this band creates. You'll want to turn up the volume, sing along and dance around
27 views0 comments

MUSIC STITCHES US TOGETHER

Music reviews, commentary, interviews, and insight about music you really ought to hear.